The original world before Surtr and the Fire Giants 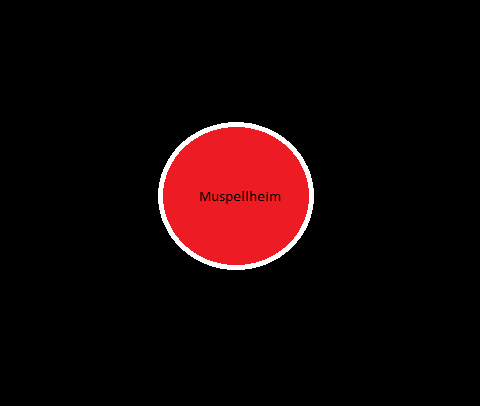 ...the first world to exist was Muspell, a glowing, fiery southern region consisting of flames, uninhabitable by non-natives. After "many ages" Niflheimr was made. Third assesses that "just as from Niflheim there was coldness and all things grim, so what was facing close to Muspell was hot and bright, but Ginunngagap was as mild as a windless sky". Third adds that when the rime and hot air met, it thawed and dripped, and the liquid intensely dropped. This liquid fell into the shape of a man, and so he was named Ymir. High explains that Ymir is the ancestor of all jötnar

The original world before Ymir according to norse cosmology:

High relates that Odin, Vili, and Vé killed Ymir, and his body produced so much blood from his wounds that within it drowned all the jötnar but two, Bergelmir, who, on a lúðr (the ark) with his (unnamed) wife, survived and repopulated the jötnar.[13]
Gangleri asks what, if High, Just-As-High, and Third believe the trio to be gods, what the three did then. High says that the trio took the body into the middle of Ginnungagap and from his flesh fashioned the Earth, from his blood the sea and lakes, from his bones rocks, scree and stones his teeth, molars, and bones. Just-As-High adds that from his gushing wounds they created the sea that surrounds the Earth

The world the gods built:

One can see why the middle world was called MIDgard.
Midgard is the ark (box) floating on the waters of chaos.
In Norse mythology, Miðgarðr became applied to the wall around the world that the gods constructed from the eyebrows of the giant Ymir as a defence against the Jotuns who lived in Jotunheim (which is of course niflheim)

http://en.wikipedia.org/wiki/Útgarðar
In Norse mythology, Útgarðar (literal meaning: "Outyards"; plural of Útgarðr; the word can be anglicized to Utgard, Utgardar and in other ways) surrounded a stronghold of the giants. In another version of Norse mythology, Utgard is thought to be the final of the three worlds connected to Yggdrasil being the home of the demons, the other two being Asgard and Midgard
Last edited: Nov 26, 2013
G

Two thoughts: Isn't Niflhel the same as Niflheimr (like an alternate name for the realm described as the domain of [the goddess] Hel, since it means "Misty Hel")? And I'm pretty sure Jötunheim was supposed to be a distinct world apart from Niflheimr, the former being the home of the Giants, the latter being the home of the dead (though they shared a border... I think).
G

hell is underground.
Niflhel is under Niflheim
G

It depends on what source you're using, and to be honest one issue I see with above is the equation of Hel with evil. The realm of Hel, was either in Nifleheim or a distinct land of the dead, but it was never seen as evil. Maybe in the Christian period it became like that, but because Hel's domain was the end result for any undistinguished individual, then it was more akin to the Babylonian and Greek Underworld of just a vast dismal misty place.

The two traditions for the cosmology come from Snorri's Gylfaggining, and the Poetic Edda poem the Voluspa. There's a couple of other mentions but it's usually described as three layers, on the World Tree as:

Top of the tree: Sits an Eagle, in conflict with the Nithog down in Nifleheim.
Highest branches: the worlds Asgard, Vanaheim, and Alfheim.
Middle branches: Midgard, Jotunheim, Svartalfheim
Lowest/Roots: Nifleheim and/or Hel, Muspelheim
Lowest area: The dragon Nithog, who gnaws at the tree's roots and whom eats the corpses who wash up on Nastrond.

I'd read the Voluspa, it's quite an interesting read, it's basically a conversation between a dead seeress in Nifleheim and Odin, as she describes the creation of the world, the major events and the eventual death of Baldur.
G

the modern concept is violence and aggression.
the ancient concept was more like (psychopathic) cold indifference
B

Exactly, and Hel wasn't an evil goddess... she was far more complex than that which I think is why I have an issue with the generalization. Mind you, there are many errors in whoever created the images. Vanaheim, as far as I can see in surviving literature was never viewed as being close to Midgard, neither was Midgard ever a wall...it was the land of the men, Middle Earth. Jotunheim was never equated with Nifleheim, ever. Unless they were working from the Saxo Grammaticus?
G


Then asked Ganglere: How were the races developed from him? Or what was done so that more men were made? Or do you believe him to be a god of whom you now spake? Made answer Har: By no means do we believe him to be god; evil was he and all his offspring, them we call frost-giants. It is said that when he slept he fell into a sweat, and then there grew under his left arm a man and a woman, and one of his feet begat with the other a son. From these come the races that are called frost-giants. The old frost-giant we call Ymer.
G


Midgard is a realm in Norse mythology. Pictured as placed somewhere in the middle of Yggdrasil, Midgard is surrounded by a world of water, or ocean, that is impassable. The ocean is inhabited by the great sea serpent Jörmungandr (Miðgarðsormr), who is so huge that he encircles the world entirely, grasping his own tail. The concept is similar to that of the Ouroboros.

In Norse mythology, Miðgarðr became applied to the wall around the world that the gods constructed from the eyebrows of the giant Ymir as a defence against the Jotuns who lived in Jotunheim, east of Manheimr, the "home of men", a word used to refer to the entire world.

The realm was said to have been formed from the flesh and blood of Ymir, his flesh constituting the land and his blood the oceans, and was connected to Asgard by the Bifröst, guarded by Heimdallr.
G

If you look at your wikipedia article, it says nothing of 'manheim' nor does it say that Midgard is the wall, midgard is instead referred to as the enclosure, ie. the land enclosed. Likewise, there is an issue with relying on etymology, since etymology doesn't equate with common meaning. Likewise, looking at the sourcing of the midgard article, the only citations come from etymological dictionaries and none from the Eddas or other literiture. Etymology can only be helpful in understanding the origin of the word and it's root, not the actual meaning of the word in common usage. Take the English word 'Dog
which has no etymology but has a common meaning.

According to John Lindow, Professor at the Univerisity of California, Berkley who wrote the book Norse Mythology: A Guide to the Gods, Heroes, Rituals and Beliefs Midgard is described as such in Grimnismal: 41. And from his (Ymir) brows the blithe gods made Midgard for the sons of Men; and from his brain the tough minded clouds were all formed.

In Gylfaggining of Snorri, Midgard is the stronghold of man, as opposed to the mountains encircling, as you said, which were inhabited by the Jotuns.
G

you seem to be missing the point entirely.
the world itself is the "wall" as you call it
it separates the air above from the water below
it is the middle gard
B

No, I'm not missing the point...I disagree with the point. Atleast when it comes to Norse cosmology of what we have left over. Then again, in other cosmologies you're right this model is very important. Egyptian nun is very similar to what you're describing.
G

Niflheim was primarily a realm of primordial ice and cold, with nine frozen rivers. Two classes of legendary being were often labeled by scholars as the inhabitants of Niflheim — the Hrímthursar, widely known as the Frost Giants (or Rime-Giants) of Norse legend; and theNiflungar ("children of the mist"), a race of treasure-hoarding spirits better remembered as the Nibelungs, the titular creatures inRichard Wagner's opera Der Ring des Nibelungen.

High relates that Odin, Vili, and Vé killed Ymir, and his body produced so much blood from his wounds that within it drowned all the jötnar but two, Bergelmir, who, on a lúðr with his (unnamed) wife, survived and repopulated the jötnar


hence Niflheim is now under water
B

The Hrimthursar and the Jotunar are two different races of Giants. Jotunar, who are as you say, the children of Bergelmir, dwell in Jotunheim:

Jotunheim was built by Odin and his brothers for the Jotuns to go and dwell there.

I think perhaps we're working from two different traditions. I'm going based on the Voluspa and Gylfaginning. Which poems say that the hrimthursar dwell in Nifleheim? and which ones say the Jotunar are in Nifleheim also?

Likewise, in Baldrs Draumer, the aesir travel to Niefleheim...so how can it be under water?

Benst said:
Etymology can only be helpful in understanding the origin of the word and it's root, not the actual meaning of the word in common usage. Take the English word 'Dog
which has no etymology but has a common meaning.
Click to expand...

I edited the images above.
You will probably have to reload the page to see the changes
G

In the beginning God created Asgard and Niflheim.
And Niflheim was without form, and void; and darkness was upon the face of Ginnungagap. And the Spirit of God moved upon the face of the waters.
And God said, Let there be light: and there was light.
And God saw the light, that it was good: and God divided the light from the darkness.
And God called the light Day, and the darkness he called Night. And the evening and the morning were the first day.

And God said, Let the waters under Svalinn be gathered together unto one place, and let the dry land appear: and it was so.
And God called the dry land Midgard; and the gathering together of the waters called he Seas: and God saw that it was good.
B